If you are also one of those people who love clicking pictures and who are interested in drones, then you should consider investing in this amazing Holy Stone GPS FPV RC Drone HS100. This high definition camera drone will let you shoot quality aerial footage and click some really stunning high def photos. The Return-to-Home (RTH) feature is really useful in this drone. Also GPS positioning means your drone finds its position accurately.

Many higher priced drones do not have an automatic return to home on low battery feature, but this Holy Stone drone does. You don’t have to worry about losing your drone, as it will automatically return to home as soon as its battery is low or signal is weak due to flying out of range. Also, it has a ‘follow me’ feature which will keep you or any subject in sight while you move around. ‘Follow me’ also keeps the drone above you automatically, keeping the camera centered on you at all times. Isn’t it amazing?

Not only this but also the- Headless Mode, Altitude Hold and One Key Takeoff and Landing for easier operation will help you get a smooth flight and that one perfect click.

What do buyers of the HS100 have to say

To give the readers a clearer view if they should buy Holy Stone GPS FPV RC Drone HS100 Camera, we spoke to users, analysed review and most of them feel that it is a stable, easy to fly drone camera.

This 60-year-old verified user finds this drone camera user friendly and said, “Let me tell you I am one pleased grandma!” She said that she was a newbie with flying drones, and yet found it very easy to handle. Her first impression of the drone as she took it out of the box, was of a sleek and smart drone. She goes on to say that the propeller blades of the drones need to be put on it, and it doesn’t come with the blades pre-attached. Also the propeller guards have to be attached. For her, the hardest part was holding the tiny little screws, which she found to be quite funny though. She was happy to note that the batteries on the drone and the controller were charged beforehand. Going by the FAA rules, the Holy Stone drone will also need to be registered, so that was something she had to do. She said that she did it online, and it took her just 10 minutes and $5.00. He reaction to registering the drone was “Easy peasy”. She also told us that her first flight went exceptionally well. Of course she calibrated it before the flying the drone. For the Holy Stone HS 100 drone was easy to fly, and the ‘Follow me’ feature was so good it felt like it was like a dog faithfully following her around. The Return To Home feature was also very effective, and the drone would return accurately and quickly on pressing the switch. It stops nearby and lands properly by itself. She also said that it was her husband show chose the drone, and one of the biggest reasons was the high quality camera. Smaller lower cost drones have very choppy video with jelly like footage, but the HS100 was far superior. One user went on to say that he has used his VR headset with this drone and there was no choppiness! Overall it was a good quality drone that won't break the bank.

Another user said, “My 8-year-old great-granddaughter demonstrates how stable the GPS feature works, making the drone a pleasure to fly. My instructions to her were to “Take-off, fly straight out over the field, move it around some, bring it back, land it.”

The drone comes with an 8 GB micro SD card and the ideal wind speed to fly Holy Stone is less than 22 mph. It is one of the best drones in its price range.

The drone, including the battery weighs 700 g / 24.7 oz (FAA is required).
The flight time is around 15 minutes, which is not bad at the cost the device is coming for and it takes just 3-6 hours to charge.
It is optimised with 720P 120° FOV FPV Wi-Fi Camera.
Its controller range is around 500 meters, which is very good, for getting great video footage and photos.
At the time of writing this article it was costing $259.99 (was down to 239.99 recently, but please check current price here), which is definitely a good deal.

How to start this drone

Pair your drone and transmitter.
Do Compass Calibration (this step is necessary) according to the manual.
Check whether GPS signal is fine and change Flight Settings if you need.
Press down take off/landing, propellers start spinning and the drone take off at an altitude of about 5 feet.
You may control the drone by your transmitter now.

We would recommend this device if you love drones and photography. You can also have a look at the best drones for filming. At its price, it is definitely a good deal. Price might be quite low now - check here. 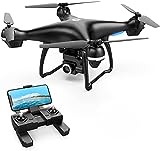